AN ANFIELD TRIBUTE TO THE DARK KNIGHT OF MORDOR 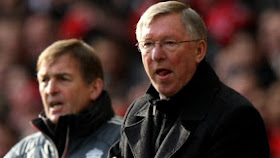 TO LISTEN TO AN AUDIO VERSION OF THIS BLOG PLEASE FOLLOW THE LINK BELOW
http://goo.gl/i0YaXU﻿
Both of my sons are boys no more. They are men now. One is 26 and one is 20. And until yesterday neither has known so much as a second of their lives when the Knight of Govan hasn’t held sway in the dark empire of Mordor at the far end of the


When he first arrived in his new lair from the frozen northern wastes, there was nothing to suggest the nemesis he would become. In later years we would hear that he made a solemn vow back in those distant days. He swore that one day he would knock ‘ off their fucking perch.’


Seldom in history has anyone been so conclusively knocked off any fucking perch!


For a while all seemed fine. For a while it was business as usual as yet another manager strode through the doors of Old Trafford to throw money at rubbish. These were the halcyon days of Mike Phelan and Jim Leighton and Clayton Blackmore. Mordor started to empty out and for a while they couldn’t even manage 40,000. We sat high on our perch and laughed our heads off.


Little did we know that far behind the scenes he was tearing down the old with the blazing passion of a fanatical zealot. Far away from the public view Sir Alex was mining for Orcs, and by the time they clambered into the light they were already an unstoppable force.


They were the Vandals and the Visagoths and the Gauls.


And we got well and truly sacked.


When the true might of his re-booted and renewed dark empire was revealed for all the world to see, we didn’t come close to having an Aragorn to smite them down. We had Julian Dicks, and Torben Piechnik and Phil Babb.


And so it was that Bill Shankly’s shining white city on the hill was smashed and burned and reduced to broken columns and stray dogs mooching through its deserted streets.


And of course we have remained under the heel of the Dark Empire ever since. Hindsight makes me remember the greatest line from George Orwell’s 1984.


‘If you want a vision of the future, imagine a boot stamping on a human face - forever.’


In the end he didn’t just knock us off our perch. He sawed up the perch and threw it into the molten lava at the heart of the mountain. We idiotically clung on to an era that was already fading fast. For us, 1986 was that golden summer of 1914 when the sun seemed like it would shine forever and nothing would ever change. But change it did. The old times were already breathing their last.


We never saw any of it coming.


But Sir Alex did.


He smelt the future on the wind and geared up for the new world of Murdoch and merchandising. He built a mighty money machine that would ensure that his newly mined army of Orcs would never suffer a day without the chance to eat some flesh.


And all of a sudden, we became an anachronism. A dream. A faded picture on the wall remembering different times. Better times. Times when money wasn’t everything. Times when Billionaires and stock markets were not required.


But the man behind the mask was never what he seemed. Of course he never allowed too many cracks to appear. For two and a half decades he played the role of the Dark Knight of Mordor to perfection.


But everything wasn’t what it said on the Mordor tin. Rumours would creep out through the tiny cracks in the walls. Young managers fired by idiotic owners would tell of late night calls from the great man. Chin up lad. There’s always another job around the corner. When the sky fell in us on 15 April 1989, he was the first to call up Kenny and say whatever he could do would be done. Anything at all.


When Gerard Houlier all but died from a massive heart attack, the first visitor through the door was Sir Alex who begged that it should be kept secret.


When the great Shipworker Union leader Jimmy Reid passed away in 2010, Sir Alex dropped everything to head north to give a heartfelt speech at his funeral. How the bloated money men of Old Trafford must have hated that. Their great leader deserted a pre season till-stuffing banjoree to remember a working class hero from the banks of the . Something tells me that the Glazers don’t do working class heroes. For the Glazers, a working class hero is someone to be stripped of every penny of their wealth and ground into the dust.


And so it was that the truth emerged as we looked up at the new world order from our new position on the floor under the place where our perch used to hang. And the truth was a hard truth to swallow.


For this Dark Knight of Mordor was in fact a new Bill Shankly. A genuine tough as teak, straight talking socialist from pre Thatcher Scotland. He shared Shankly’s remorseless passion and determination. He shared Shankly’s unstoppable will to conquer everything in his path. And underneath their ferocious public face, they shared the same rock solid humanity.


They were true men of the people.


Maybe the last men of the people.


My one brief contact with the great man shines a light on his true greatness. It was the early days of First Base and I was helping a client along the hard road to becoming heroin free and the hope of a Rehab centre. The client in question was a genuine disciple of Mordor and never missed an opportunity to crow about it. I spoke to him on the phone when he was a few days into the unforgiving regime of the Rehab Centre and when I finished the call I had little optimism he would stay the course.


Slowly, but surely he was being drawn back towards the comfort of heroin’s warm and jealous embrace.


Without much hope I decided on the wing and a prayer option and penned a letter to Sir Alex. I explained how far my client had come and how he was now hanging by a thread. I suggested that Sir Alex must have seen at first hand how the Scottish heroin plague had eaten away at his beloved Govan. I implored him to maybe drop a note to my man and I hopefully included the address of the rehab centre.


I remember clearly dropping the letter into the postbox.


And I was almost totally convinced that my letter would disappear into some cavernous post room in the bowels of the dark Empire.


How wrong I was.


A few days later I got a call from my man at the Rehab Centre and the voice was that of a completely different human being. He had received post that morning. A package. It contained a long, hand written note and a signed photo from Sir Alex. And these words were all that was needed to make my man believe in himself. He stayed the course. He found his new life. He was inspired.


After that, I became an unshakeable convert. So what that he had knocked us off our fucking perch. Shankly knocked everyone in sight off their fucking perches. After that, the football and the tribalism became secondary. After that day I saw only a great man with the heart to find the time to write to a lost lad in a rehab centre who was hanging by a thread.


So farewell Sir Alex and may your retirement be a golden one. I hope your horses win and your grandchildren behave themselves. In the god awful money mad world of the Premiership and Champions League, it seems inconceivable that we will ever see your likes again.


Now at least we might just have a chance of getting back onto our fucking perch again.
Mark Frankland at 12:41 AM