THE HIDEOUS ANTICS OF THE TABLOID PRESS MIGHT WELL DELIVER OUR INDEPENDENCE ON A PLATE. 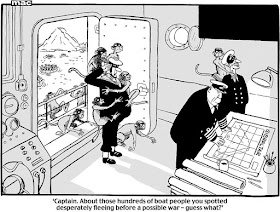 This has felt like a real game changing week for the cause of Scottish Independence. At long last we seem to be getting onto the ground we need to be on. I remember clearly giving talk after talk back in 2014 where I tried to sell the idea of 'Brand Scotland'. How we need to pay attention to what the rest of the world thinks of us. How we need to sell what we have to offer with all the vibrant enthusiasm of a Mumbai street hawker. How we need to stop being constantly obsessed by the way those south of the border are looking at us. At our aspirations. I can't say my message always played all that well!

Well here's how I see it.

Every time some second rate hack steals a minute or two of limelight to sneer and mock the very idea of an independent Scotland, we allow our hackles to rise up. Smug right wingers like Julia Hartley Brewer or Katie Hopkins are presented as having some kind of huge influence on events and we duly react as if they actually have a degree of importance.

They barely deserve to be classified as bit part players. At some stage we were always about to wake up to this tawdry reality. These are low grade click bait who are paid to pander to the worst instincts of retired people in Slough who are spitting angry about a Sikh family moving in three doors down.

I guess as a white settler who headed north to Scotland to escape the growing race hate in my home town of Blackburn, I tend to see what is going down in England more clearly than some of my fellow YES travelers. The poison has been there for years. The Brexit vote was merely the pin which popped the balloon and allowed it to seep out into the light. For many years the tabloid press has been patiently stirring this toxic pot whilst slowly but surely bringing it to boiling point.

There has been a clear agenda for the last few decades as London has been sucking the blood of the rest of the country. Every year 49,999,000 English people get a little bit poorer whilst a thousand or so of the gilded rich sail off into their British Virgin Island sunsets. The big worry of the one percent has always been that this monumental act of larceny might become a thing with the the 49,999,000 who are being so royally screwed over. So the tabloid editors who have been tasked to find a way to get the public to look in the opposite direction to the scene of the crime have always been on the look out for new and different people to blame. We all know the list. The miners, the Scousers, the IRA, benefits claimants, immigrants, Islamic nutters, the EU and now, of course, the pesky Scots.

There is no escaping the fact that this nasty undertaking has by and large gone pretty well. After all, me and my fellow Liverpool fans were successfully blamed for something we didn't do for almost thirty years as a result of our being branded as part of the 'enemy within'.

I recall an extraordinary stat from the 2014 campaign which demonstrated the breathtaking reality of the UK's 'London First' policy. The average spend on transport per head of population in London in 2013 was over £3000. In the North East of England it was £40. The Geordies really should have been marching south with their pitch forks. Instead they allowed themselves to be brain washed into blaming foreigners for the abject poverty of their region. The extent of the brain washing only became apparent on June 23rd when the North East proved to be very much at the top of the xenophobia charts.

We Scots have been up to much the same thing for the last couple of decades. We blame London, not foreign people, for most of our ills. The big difference is that we are absolutely right to do so! Potholes on the roads of Hartlepool have nothing whatsoever to do with Polish nurses. The fact that the income from Scottish oil was used to build the M25 DID have absolutely everything to do with London. It was London's motorway. It was London's call.

Because we have rightly looked to London not foreigners as the main reason for many of the things wrong with our country, we have turned into a much nicer place. We haven't been duped into blaming the blameless. Nobody up here blames immigrants for so many people needing foodbanks. Instead we blame the Department of Work and Pensions. As in the very people who have actually caused so many among us to need a foodbank for their daily bread. Polish nurses have never taken the food from anybody's table. Well, I'm pretty sure they haven't.

In a nutshell, up here we see the real perpetrators. We see who they are and where they are. We have not been deflected. As a result we have become a better place to be. It is no accident UKIP can't get a toe hold up here. Or the BNP. Those charged with keeping the grubby secrets of the super rich have known this for years. The Daily Mail never runs the same headlines up here as they do in their English editions. They know there is little appetite for racist poison north of Gretna Green. Instead they focus on being cheerleaders for Ruth Davidson.

In 2014 it seemed to me we should have spent more time shouting from the rooftops about how every different we are from our southern neighbours. I understand why we didn't. We instinctively realised any criticism of England would soon be spun into us being mouth-frothing IRA style separatists. Fair enough. I get it.

A big one for me was the news that several mainstream Polish newspapers encouraged their countrymen in England to up sticks and head north to Scotland. Why? Because it is a nicer and safer place for them to be. And the papers didn't just encourage them to migrate north. They went further. They encouraged their fellow Poles to claim their right to vote in Indyref 2 and to do their bit to launch an independent Scotland out into the world.

Then there was the German MEP who is known to be a close ally of Angela Merkel going out of his way to say any Scottish application for EU membership would be fast tracked.

Then there was the Spanish Foreign Minister who for the first time went out of his way to go very public about Spain having no intention whatsoever of vetoing any Scottish EU application.

Then there was Nicola's smooth American tour played out to packed out rooms. Smiling faces and optimistic thoughts all round. It would have been a good look at any time. The fact she was doing her upbeat stuff in the States at the very same time as Theresa May was peddling yet more bombs to the Saudi royal family only made the gulf between London and Edinburgh seem all the wider.

And all the while the tabloids were screaming like spoilt kids, mainly about how Britain can give Spain a proper kicking whenever we like. You want a say on the future of Gibraltar? Oh really. Tell you what Pedro. Try this one on for size. Let us quote you some wise words from the good old boys of Millwall football club – come and have a go if you think you're hard enough.

Look. We've got Michael Caine. Who've you got you sad bastards? Manuel from Fawlty Towers?

Andrew Mitchell, Cameron's overseas aid wallah returned home from a visit to Yemen with a few troubling questions. He had been to a school bombed flat by the Saudi air force. The British tax payer had stumped up hundreds of thousands of pounds to build the school. Then the British government had trousered hundreds of thousands of pounds for the not so smart bombs the House of Faud used to send the school back into the stone age. Andrew asked where was the sense in any of this? All our gallant PM wanted to talk about was Easter eggs.

Our tabloids enthusiastically followed Ruth Davidson's lead and started to spit feathers about Nicola ignoring her 'day job' and flying the Saltire across the Pond to America. Maybe she should have hawked a few smart bombs. Go on Nicola. Go and get yourself a proper day job. You don't go to foreign countries to make nice. You go to foreign countries to sell top dollar military hardware. Capiche?

And at the very same time Liam Fox heroically flew the flag for each and every one of his fellow proud Brits in the Philippines. He did the regulation beaming photo call with their psychotic President and gushed on about how we share so many values. Like executing drug addicts? Really Liam?

The good news is the the rest of the world is noticing all of this. Slowly but surely more and more people from all corners of the planet are taking the opportunity to make nice about Scotland. They are beginning to see us as a beacon of hope in the darkening world of Trump and Putin. We might not be all set to become the next shining city on the hill, but I reckon we can aspire to be a shining village. Brand Scotland has never enjoyed such widespread recognition. And acclimation.

Nobody beyond our shores has the slightest interest in what the likes of Ruth Davidson or Katie Hopkins have to say about anything. They couldn't care less. Instead we are seen as a brave little country determined not to be dragged down into the xenophobic swamp by our big bully neighbour.

We need to live up to their expectations and stop listening to anything the Unionists have to say. It is time to act like a people who know our time is coming and the 300 year long era of 'London First' is all but done.

The Mail printed the cartoon because they seriously believed lots of their English readers would like it. Find it funny. Make their Cornflakes taste just that little bit better. Oh how priceless! Look at this Harriot! Those jolly chaps at the Mail are comparing refugees fleeing for their lives to monkeys. Bloody classic.....

It saddens me to see the likes of Nigel Farage are leading England down such a dark path. Every day I thank my lucky stars to have got out of Dodge in time. What appears on the front pages of the British press does not go unnoticed abroad. The fact that our second best selling rag compared boat people to monkeys won't have gone unnoticed.

Thankfully most of the world now sees very clearly this is an English thing. Thankfully they now see just how different we are to our Southern neighbours.

Thankfully the rest of the world is more and more on our side with every passing week. And that is a really, really big deal.

When I bang on about Brand Scotland next time around, something tells me everyone in the room will get it.