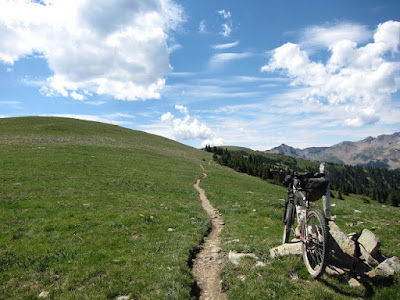 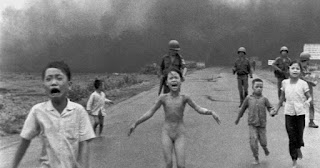 It's an iconic picture, right? A now familiar picture. It was taken in the very darkest depths of the Vietnam War. It was taken at a time when the American military were becoming overly comfortable with their newly minted term, 'collateral damage'. It was their way of making primordial horror easier on the ear. Collateral damage? Sounds pretty harmless. I mean, how bad can things really be when two such seemingly innocent words are hooked up with each other and sent out into the airwaves.

The picture's stark brutal truth soon elbowed its way into the very forefront of the world's attention span. Collateral damage in the flesh. The ruined, charred, napalm burned flesh of a young girl stripped of all dignity. Modern, industrialised war up close and personal.

In 'Apocalypse Now', Kurtz nails it down into a tightly wrapped sentence.

"We train our young men to drop fire on people but their commanders won't allow them to write 'FUCK' on their aeroplanes.... why? ..... because it's obscene....."

And then there is this picture. 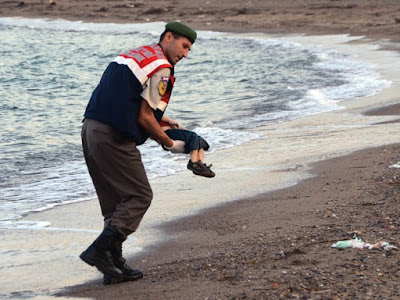 It's familiar of course. The Turkish policeman and the dead Syrian toddler. Just one death in the midst of tens of thousands, but a different death. A death to make it real. A death which turned the nation against Katie Hopkins for labelling desperate human beings fleeing the killing fields of Syria as 'cockroaches'. And suddenly we were able to see the refugees as fellow human beings as opposed to threatening statistics.

Just for a while.

Well last week a snapshot of England 2018 walked into First Base and rang the bell on the counter.

I'm going to call him Bradley and in a few paragraphs time you will figure out why.

There was nothing about Bradley at first glance to lead me to think he was about to become iconic. Early twenties. An air of politeness. A slightly nervous smile.

He passed me his referral form with apologetic body language. And when he spoke his voice was from my neck of the woods. Just the merest hint of Noel Gallagher. Old cotton mills transformed into quirky shopping malls. Peterloo and Sir Alex Fergusson and snarled up traffic on the M62.

I read the bare bones.

"Well. Yes. But that was a while ago. I suppose I'm just homeless now."

The paper bore the name of a hostel in town.

"But your sorted for a place to stay?"

"Yeah. I just need to take things step by step. You know. I need to put things back together one by one."

A quiet, considered voice. Measured. Not a trace of anger or outrage. I got the feeling he was beyond all that. Yesterday is dead and gone and tomorrow's out of sight....

As I put is parcel together I wondered if he would volunteer his story. I never ask. At First Base we give people food whether they tell us their story or not.

Bradley laid out the bare bones without any realisation of his story being anything particularly extraordinary. And he was wrong about that. About as wrong as wrong can be.

In his quiet Mancunian, he described a modern day Odyssey. An iconic picture of England 2018. And in a way it is also a picture of Scotland 2018.

One minute life was rolling along and the next moment things went to hell and Bradley found himself homeless. He went through all the right doors to ask for help. For a chit to use the safety net. For the support of the country of his birth. Of England. Of the green and pleasant land that once upon a time had sprouted all those dark satanic mills.

And what did he find? Nothing. No warm embrace. No soft landing. Instead it was the streets. Long nights and the brutal, biting cold of the dawn. Distant sirens. Drunken shouts and the growl of the pre-dawn road sweeper.

Lost and not a chance of being found. Every day he asked the question. And every day the answer was the same. No room in the inn. No room anywhere. Only the pavement or the park.

So he took stock. He weighed his options. He reviewed his worldly goods. A bike and a bag of clothes.

And he came up with a plan.

Thirty something years ago, Norman Tebbit came up with his iconic interview. What should those left penniless and unemployed do to make their lives better? Get on their bikes. Go to where the work was waiting to be found. Away from the places where once upon a time ships were built and steel milled and coal mined and cotton spun.

Well Bradley had a bike. Have bike, can travel right? And he signed up to his own simple plan. So there was no homeless accommodation to be had in his home town of Manchester. So maybe he could find a different town where the answer would be different. Maybe. Only one way to find out.

So he saddled up and started peddling. And in every new town he stopped and asked the same question. Again and again and again. Is there anywhere for me to stay here? Is there any room in the inn?

And the answer was always the same. A flat 'no'. All full up here. Sorry, but it's the cuts you see. Austerity. And as he worked his way north through Wigan and Preston and Lancaster he started to hear different words over and over.

And as the plains of Lancashire gave way to the mountains of Cumbria, he started to hear whispers of a place where there was still a sliver of hope to be found. At first it was just a myth, but with every hard mile north the myth took a little more shape and form. And reality.

A place called Scotland. A place of sanctuary. A place were basic humanity hadn't been binned off in the name of austerity. And the hope of Scotland kept him peddling over the rain soaked hills.

There was no room in the inn in Kendal or Penrith or Carlisle.

I wonder how he felt when at last he reached the big blue sign. 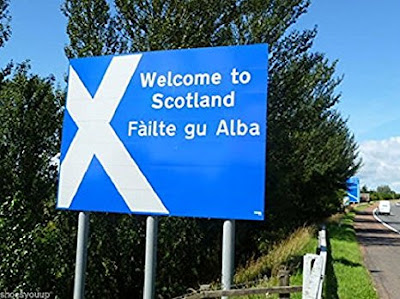 And suddenly he was on the last leg. Dumfries 23 miles. No more mountains. Flat back roads. Easy peddling for his now strong legs. And at last when he asked the question, the answer was yes. Yes there is somewhere. A bed. Clean sheets. A place to wash. A place to be warm. And a piece of paper and a set of directions.

A bag of food to be warmed up in the communal kitchen. The basics of life. A roof and a chance of something hot to eat. A toe hold. A start point. A line in the sand. A chance to find a way to start over. A place to forge a new life.

A hundred and fifty years ago, hundreds of thousands of Scots took ships across the Atlantic to seek out better lives in America. For them it was Ellis Island and the Statue of Liberty.

Bradley got himself a blue sign and a Homeless Department who said yes.

I think he'll do OK. He carries a thoughtful intelligence and his quiet manners are instinctive. He's more than employable and I don't think it will take him very long to be employed. He'll be a good addition. A new citizen. A new Scot. A refugee from the brutal reality of what England has become in 2018.

People up here have no clue of just how bad things are getting south of the border. They have no idea of how far the hospitals and schools have fallen. They have no sense of the brutal, hopeless bleakness.

You don't cycle 150 miles to put a roof over your head unless to really have to.

This is why Bradley's modern day Odyssey is so iconic. It says much about England 2018. It also says much about Scotland 2018. Those in Westminster might see us as being on a par with Lincolnshire County Council. Well they are deluded on most things, so I guess there is little reason to feel surprised.

In reality, England and Scotland are drifting apart. London continues to deny Edinburgh any say on immigration. And they seem to think they have the whip hand. But they are missing what is going down in their blind spot. They might be able to lay down the law about migrants from the rest of the world, but there's not a thing they can do about internal migration.

And let's be clear about this, internal migration is a mighty big deal. Remember all the millions of freed slaves who left the cotton fields and headed north to power the steel mills of Pennsylvania. Look at the hundreds of millions of rural Chinese who had checked in their villages for the mega cities and thereby enabled their country to move up to number two in the economic league table.

The word of Scotland is spreading. We are becoming a beacon for people who hate what England is becoming. Many will be nurses and teachers and programmers. Others will merely be at the end of their tether.

And this is about to become something which is absolutely huge. For hundreds of years Scotland has been a place people have been forced to run away from. Well not any more.

Now we are the sanctuary. The shining city on the hill. A place far from the poisonous, festering nastiness of Farage and Rees Mogg and May and Johnson.

We are the place which offers the kind of hope you ride a bike a hundred and fifty miles to get a piece of.

Oh, and by the way. If you can spare a couple of quid to help us to support more Bradleys please check out the link below

THE FIRST BASE FUNDRAISING PAGE