WE SCOTS ARE SO MUCH BETTER GOVERNED THAN THE POORS SODS SOUTH OF THE BORDER. IF ONY WE WERE BETTER AT SHOUTING ABOUT IT. 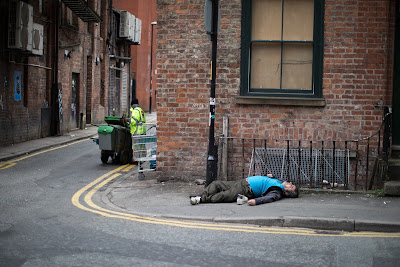 Why do those of us on the Yes side of the argument want to live in an independent country?

It really should be a big, fat Duh!

We just want to live in a better place.

So what we hope for is the chance to be better governed.

I guess the thing is this. We've had partially devolved government for twenty years now. Plenty of chance to prove we can make a better fist of things when we are left to our own devices.

Of course there a bunch of things we can wave at the doubters to make our point. Free tuition, free care for the elderly, free prescriptions....

What pisses me off is how hard we seem to find it to go beyond this list. Basically I wish we could get a whole lot better at pointing out how good, common sense policies make living in Scotland so much better than living south of the border.

Maybe this will put some flesh on the bones.

Yesterday I called in to see Linda, our account, to drop off the First Base 2018/19 figures.

We sat and chatted and she asked me couple of questions which were easy for me to an answer. Why? Because I work in a food bank which means I  get to see how things work at the bottom of the ladder.

A friend of hers had been in Leeds for a couple of days and was rocked by the sight of so many people making like twenty first century Zombies care of smoking Spice. How come we don't see the same thing up here?

As the manager of a food bank, the answer is easy enough to work out.
If you live in Scotland and your life hits the bricks, you have a fighting chance of getting some help. Hitting the bricks more often than not means finding yourself homeless. If you live in Scotland, you can pitch up at the local homeless department and you are more than likely to be given a bed for the night. Not always and things are far from perfect. But most of the time it will happen and you get the chance to make a start on putting your life back on track.

In England things are very different. In England the answer is almost certainly going to be an apologetic shrug of the shoulders. Sorry but its all the cuts.... Maybe tomorrow.... and so the only show in town is the cardboard box in a shop doorway option. It's a huge shock to the system. And you find it hard to believe this has actually happened.

Think about it. Think about trying to fashion some warmth out of a few bits of cardboard and a cheap and cheerful sleeping bag on a cold, wet night in February.

Lonely, terrifying and off the scales depressing.

As the days drift by, you start to hook up with others in the same boat. And you start to learn a few hard facts of your new life. Sure, you can queue up at the homeless department every day but the answer will always be the same.

Sorry, but it's all the cuts... Maybe tomorrow. A groundhog day of ground down misery. Now if you were a dog, then things would be a whole lot different. But things for a human being in England 2019 ain't so bright. George Orwell was way off the mark in this respect. It's four legs good and two legs bad when it comes to being being granted a warm place to sleep on a cold, wet February night in England 2019.

So what happens next? Well your fellow shop doorway people will tell you the key to getting a few hours kip on a cold, wet February night in England 2019. It's called Spice. Cheap, cheerful and abundant, and a decent dunt will sent you all the way into a world of black nothingness. And it doesn't matter how wet and cold the February night might get, it won't touch you. You don't even need cardboard. All you need is a pavement to make like a corpse on. And if your luck is in, you might wake up on a trolley in A&E.

Of course the Spice honeymoon period doesn't last for very long. Soon you'll be well and truly addicted and you mental health will be melting away like a candle in a furnace.

And even though it's cheap and cheerful, it still needs at least a tenner a day to keep the demons at bay: to find the release of stone cold unconsciousness.

So it's time learn to beg and steal. No point in even thinking of borrowing. But you'll soon find out the hard way that Spice and successful thieving are not natural bedfellows.

You'll blow it and soon you'll be up in front of the local Magistrate who will sent you down for a few weeks to learn your lesson.

And at first this seems like a pretty good outcome. Prison means warmth and a bed and a TV and a pool table and three square meals a day. You know this because you read about in the Daily Mail in the time when your life was still on the the tracks.

It doesn't take so very long for the hard realities to reveal themselves. Three to a cell on a 23 hour a day lockdown. Three human beings that is. There is no cap on the numbers of rats and cockroaches. The prison is a festering tinderbox where Spice and violence go hand in hand. And every day feels like a month and every week feels like a year and once again the only escape is the black nothingness of Spice.

No rehabilitation. No support. No nothing. Just weeks of dog eat dog until the system dumps you back out on the street with a few quid and nowhere to stay.

Kick people when they are down and kick them hard.

Most of the time these things are done in the name of the god of Austerity. Ever since the Tories took the reigns back in 2010 money, has been ripped out of he budgets for combating homelessness and providing decent prisons.

The same money has been taken away from our budgets up here in Scotland. So why are there no rough sleepers here in Dumfries whilst almost every doorway in Lancaster is home to a cardboard sleeper? On the face of things, the two towns are pretty similar, sixty or so miles apart as the crow flies. They are both administrative centres surrounded by postcard worth countryside. By most measures, Lancaster is richer. Houses certainly cost double what they cost here.

So why are there no shop doorway people here and so many down there? Are we spending a whole lot more cash? You would think we must be.

Well, actually, no we aren't.

Here are a couple of case studies.

A guy's life goes to shit and he finds himself homeless. So he goes to the homeless department and they find him a place to stay. He needs emergency accommodation for a hundred days at £50 a night. Ouch. £5000. A hundred days is enough to get our man onto benefits and eventually into a place of his own where he can take a deep breath, but things back together and eventually find himself a job and a reasonably normal life.

Total investment? Maybe £10,000 all in. Result? Eventually our guy becomes a net contributor. A bit of tax. A bit of National Insurance. VAT when he goes shopping. Council tax. All the usual nuts and bolts.

A guy's life goes to shit and he finds himself homeless. He goes to the homeless department only to be told there is no chance. The cuts and all that. So he becomes a Spice smoking, cardboard box guy. And after a hundred days he hasn't cost the State a single penny.

And one and on and on it goes. Chronically depressed, Spice smoking, cardboard box guys cost a living fortune. Tens of thousands a year until they finally become ill enough to die.

So why on earth would the English government be so utterly stupid? Why would anyone in their right mind choose to spent over £100,000 on a broken citizen when all the evidence shows £10,000 is more than enough to turn a broken citizen into a productive tax paying citizen.

I don't pretend to know the answer for to know such a thing would mean getting inside the head of a Tory which isn't a thing I find easy to do.

Maybe there are a couple of key differences.

Many of the so called services south of the border have been privatised – prisons, probation etc. And once things get privatised, the money doesn't seem to go very far. Endless millions seem to disappear through the cracks only to miraculously re-emerge in the British Virgin Isles.

The other big difference is the fact that our policy makers have the luxury of choosing solutions which actually work rather than policies demanded by the Daily Mail.

Like I said. Smart. Evidence based Common sense. Oh, and humane too.

You'd think London might look enviously over the border and think we wouldn't mind a bit of that.

Except the Mail and the Sun and the Express and the Telegraph all say a loud, resounding NO to this kind of thing. They demand a 'lock em up and throw away the key' approch and to hell with how much money it costs. Just so long as the Conservatory companies keep on buying advertising space, they'll keep peddling crap to the bitter retired who buy their papers and vote for a hard line approach.

Which is why they have the appalling Priti Patel promising another 10,000 prison places.

Which is why when London was in charge, Glasgow was the knife capital of Europe. And why after twenty years of our running our own railroad, it is nowhere close to the top of the league. We were able to stop doing things the Daily Mail way and stuffing Barlinnie to bursting point and instead treat knife crime as a health issue and slowly but surely find a way to get a grip on it.

Smart. Evidence based Common sense. Oh, and humane too.

Sounds lie a pretty good way to do things, right?

Thank Christ we don't do Tory governments and we seem to be able to make policy without giving a second's thought to what the Daily Mail may or may not think about it.
Posted by Mark Frankland at 3:25 AM 3 comments: