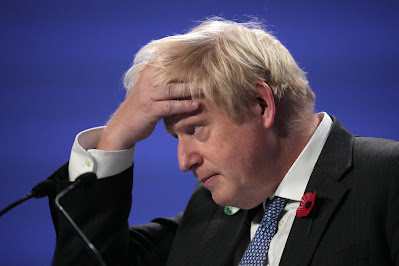 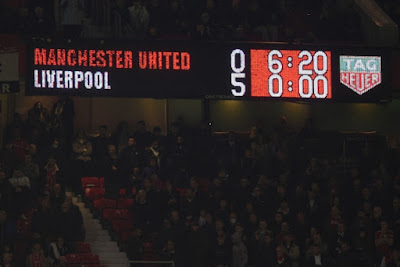 A few months ago I found myself in what I guess might be called a double pinch myself moment. You know the kind of moment, right? As in this is all so utterly extraordinary I really must be dreaming.
Some context.
Liverpool were in the midst of their annual journey into the beating heart of the Evil Empire.
As in Old Trafford, that great crumbling, boxy monstrosity squatting like a malevolent Soviet era eyesore in the heart of Salford.
As in Mordor.
Complete with a full complement of 76,000 baying Orcs.
Sixty minutes on the clock and there were words and letters on the TV screen I never thought possible.
Manchester United 0 - Liverpool 5.
Yup.
Not a fever dream on the back of a tab of acid.
Cold, hard, actual, really happening reality.
Manchester United 0 - Liverpool 5
Pinch, pinch, pinch.
I pinched until my flesh was bruised and still I didn't wake up to a world more familiar.
Not only was it it five nil, it looked like at any second it would be six. Then seven. Then eight. Nine?
The forces of darkness were imploding in front of my disbelieving eyes.
A result for the ages was in the making. Half a century's worth of bragging rights.
My mind wandered back a couple of years to one of my more bizarre experiences of watching the lads taking the East Lancs road to Mordor.
I was in front of a big TV in the bar of a somewhat threadbare lodge in Queen Elizabeth Game Park in South West Uganda.
Rift Valley. Ruwenzori Mountains. Eighty degrees of heat undeterred by the lazy rusty fans on the paint cracked ceiling.
People had driven in from far and wide to take advantage of the rare satellite signal. Sky Sports in the heart of Africa.
The much vaunted global tribes of two clubs followed by hundreds of millions.
The two guys beside me soon revealed themselves as Mancs as Marcus Rashford opened the scoring and sent the Orcs in the stadium into overdrive.
Both were well fed and watered and they wore the clothes of the Ugandan one percent. Maybe politicians? Maybe policemen? Definitely well heeled Government.
At one point, the guy next to me cocked an ear to the screen and picked out the song the Orcs in the stadium were belting out.
Our song with their words.
He grinned and lent in to me to spell out the words in his rich African voice.
"Sign on, Sign on with hope in your heart and you'll never get a job...."
Seriously.
Half an hour or so later Adam Lallana equalised and Liverpool grabbed an undeserved draw.
We went on to win the league.
They didn't.
Just for the record.
Anyway.
Back to my pinch myself moment of a few months ago. 0 - 5 with thirty opportunity rich minutes left on the clock.
It was at this moment I arrived at pinch myself moment number two as the cameras zoomed in on the ashen face of the United manager.
Ole Gunnar Solskjaer.
The one time 'Bay Faced Assassin'.
Three years into the role and doing the kind of job for Mordor Robert Mugabe once upon a time did for Zimbabwe.
Every day he hung on meant more long term damage.
Every day he hung on to his job was a day of joy for us.
Every day he hung on to his job was a lingering nightmare for the Orcs.
Would he survive 0 - 5?
Doubtful, but there was a sliver of a chance.
Would he survive 0 - 8?
Not a prayer. Not in a million years.
So what to hope for? Settle for 0 - 5 and the chance of a few more catastrophic weeks in Mordor?
Or go for the utter blissful nemesis option?
Short term gratification or long term damage?
A actually surprised myself by choosing the long term strategic option and had no complaints when the lads played quiet disdainful keep ball for the last thirty minutes and allowed the scoreboard to be frozen at 0 - 5.
For all of history.
And now in the grey cold of January it seems a kind of Groundhog Day has arrived.
Another Mordor is under siege. A different Mordor. A Mordor sited two hundred miles south of Old Trafford.
A Mordor at the heart of another vindictive, shrunken dark empire.
The Mordor of Prime Minister Boris Johnson and all his hideous cronies.
My utter contempt for Johnson is as absolute as contempt can get. I knew plenty like him at college. Preening, entitled Etonian twats. But he is next level.
This is an article he signed off on when he was Editor at the Spectator.

"The extreme reaction to Mr Bigley's murder is fed by the fact that he was a Liverpudlian. Liverpool is a handsome city with a tribal sense of community. A combination of economic misfortune — its docks were, fundamentally, on the wrong side of England when Britain entered what is now the European Union — and an excessive predilection for welfarism have created a peculiar, and deeply unattractive, psyche among many Liverpudlians.

They see themselves whenever possible as victims, and resent their victim status; yet at the same time they wallow in it. Part of this flawed psychological state is that they cannot accept that they might have made any contribution to their misfortunes, but seek rather to blame someone else for it, there by deepening their sense of shared tribal grievance against the rest of society.

The deaths of more than 50 Liverpool football supporters at Hillsborough in 1989 was undeniably a greater tragedy than the single death, however horrible, of Mr Bigley; but that is no excuse for Liverpool's failure to acknowledge, even to this day, the part played in the disaster by drunken fans at the back of the crowd who mindlessly tried to fight their way into the ground that Saturday afternoon. The police became a convenient scapegoat, and the Sun newspaper a whipping-boy for daring, albeit in a tasteless fashion, to hint at the wider causes of the incident."

Yeah.
Over fifty? It was ninety six in case you're remotely interested. Ninety seven now.
I was one of those fans at the back of the crowd. Not drunk by the way. Just there. Alive by the roll of a dice.
There are no words.
I have never truly hated a politician before. But believe me, I truly hate Johnson. I have reached the stage where I can't even stand to look at him any more.
The good people of Liverpool are not alone when it comes to being the butt of a pathetic Johnson joke.
Here are some more words the bastard signed of on during his days at the helm of the Spectator. This time the good folk of Scotland are in his pig eyed sight.
"The Scotch – what a verminous race!

Canny, pushy, chippy, they’re all over the place,

Battening off us with false bonhomie,

Polluting our stock, undermining our economy.

Down with sandy hair and knobbly knees!

Suppress the tartan dwarves and the Wee Frees!

Ban the kilt, the skean-dhu and the sporran

To pen them in a ghetto on the other side.

I would go further. The nation

We must not flinch from a solution."

Yeah. He actually thought this vicious drivel was funny. Fit for publication. "The nation deserves not merely isolation but comprehensive extermination. We must not flinch from a solution."

I think I should repeat the last line

"We must not flinch from a solution."

Is it a bit too Adolf Eichmann 1942 for your taste? It is for mine.

So believe you me I am enjoying every second of watching his slow and dismal demise. I am relishing the sight of every knife being eased into his flailing carcass.

But do I want to see him yanked out of 10 Downing Street and tossed unceremoniously onto the street?

I'm back to a 0 - 5 shaped dilemma. I keep telling myself to look beyond short term gratification and to focus on the bigger picture.

The 'Yes' campaign will never have a greater asset than Johnson. Every day he clings to power sees a few thousand more make the move from 'No' to 'Yes'.

A few more months of Johnson might well be enough to seal the deal.

So 'Operation Save Big Dog'?

Absolutely! Bring it on. And please let it succeed in spades because a few more months of this uniquely hideous human being will surely be enough to make an Independent Scotland a nailed on certainty.