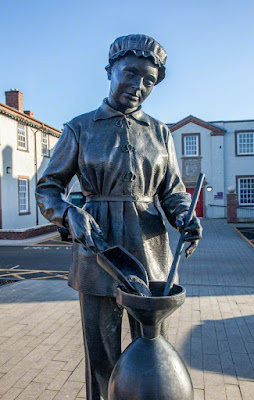 On the day the Colston Four were found not guilty by a jury of their peers, I was delivering a week's worth of food to a guy in Gretna. It has become part of my routine. A couple months ago I returned a call to his support worker to pick up the referral. She explained how ill he was. Just out of hospital and barely capable of anything. I duly read between the carefully drawn lines. It wasn't just any kind of ill. It was ill of the terminal variety.

It certainly seems that way.

Every week it takes my man a little longer to come to the door.

Every week he is a few pounds lighter.

Every week the stretched skin of his face is a lighter shade of grey.

But I am digressing here.

Back to the Colston Four. Back to statues.

In case you have been residing in a cave for the last couple of years, the Colston Four were the guys picked out from a crowd of 3000 and put on trial for pulling down the statue of a bang to rights slave trader and tossing it into Bristol harbour.

Priti Patel and her fellow culture warriors were quick to demand the very harshest of punishment for this wicked crime against our glorious imperial past. Unsurprisingly I didn't see it that way. My two sons are descendants of the desperate souls Colston and his ilk bought and sold. The government in Westminster has come up with a new way of describing the whole slave trading thing. They now call it the 'Carribbean Experience'.

Like surviving the Middle Passage was akin to flying across the Atlantic with Virgin and dancing to Eddie Grant in beach front night club.

It seems worth giving a serious shout out to the lawyers who came up with a defense case good enough to ensure the Colston Four are now able to enjoy their liberty.

They didn't have an easy task. The might of the Establishment was baying for blood and the right wing press was with them every step of the way.

Their clients openly admitted their obvious guilt to the crime of pulling down the statue and tossing it in the drink.

So how do you come up with a defense good enough to persuade the jury to let them off and allow them to go back to living their lives?

Well, here's how it was done.

They called up a witness with expertise in the valuation of historical artifacts.

In your judgement, how much was the statue worth when it was sitting on a plinth in the city centre? How much cash could Bristol City Council have raised had they decided it was an asset they wanted to cash in to help pay for more bin men?

Now. Once the statue had been duly sprayed with graffiti, pulled down, rolled along the street, tossed into the water and then dragged out by a crane and sent into a museum, surely it can't have been worth much more than the scrap metal price?

Before the Colston Four and their fellow travellers did what they did, the Colston statue was basically unheard of outside Bristol. Taking a dive into the harbour in such spectacular fashion turned the statue into something of a worldwide superstar. For a week or two, it's celebrity status was right up there with the Statue of Liberty.

So what kind of cash would Bristol City Council raise were they to cash in today?

Oh loads. A least half a million. Maybe even a million. There would be an awful lot of potential buyers with seriously deep pockets.

So. Let's just put things into proper perspective. The Colston Four are accused of committing criminal damage causing a material loss to Bristol City Council. And yet the result of their actions is a million pound boost to the balance sheet of the aforesaid Council.

I mean, come on guys! The public purse is the big winner here.

Well this gave the jury all the wriggle room they needed to allow the Colston Four to walk free and thereby sticking two fingers up to Patel and the right wing press.

It's nice when the good guys win for once.

On this day of statues, my attention was drawn to the one at the top of the page.

A Gretna statue. I guess you could call it a statue to the unknown munitions worker.

Unlike the Edward Colston statue, this was not erected in Victorian times. It is only five years old. I guess it was the hundredth anniversary of the Somme which lay behind the commissioning decision.

Before tens of thousands of soldiers obeyed the sound of the whistle and jumped out of their trenches into a hail of machine gun fire, the Brits had landed the greatest artillery barrage in history on the German trenches. It went on for a week and involved one and a half million shells.

A lot of bang and a lot of buck.

A large percentage of these shells were filled and primed in the vast armaments factories which were built along the Solway Coast. Tens of thousands of young women manned the assembly lines to fill the shell cases with what they nicknamed 'The Devil's Porridge'.

It was grim, dangerous work and there were industrial accidents a plenty.

The High Command had high hopes for the million and a half shells the lasses filled and primed. They were supposed to herald a march all the way to Berlin.

They didn't of course.

Instead they heralded 20,000 dead on the British Army's darkest day.

Did the Generals learn the lesson?

Not a chance. For the next two years the factories on the Solway Coast continued to send millions of shells to the Western Front and the German machine gun nests continued to make No Man's Land a place of biblical carnage.

In the spring of 1917 the High Command turned up in Downing Street with plans for more of the same. In their judgement, a million and half shells hadn't been enough. Not nearly enough. In order to smash through the German lines they would need more. A whole lot more. Enough to keep the lasses on the Solway running for twenty four hours a day for weeks on end.

But there was a problem. A big one.

The main reason tens of thousands of young Scottish women had flocked down to the coast to pull twelve hour shifts working the Devil's Porridge was the money the Government was paying in wages. Munitions work offered the equivalent of four or five times the going rate. And a chance to get away from mum and dad and lives of utter drudgery.

Which of course was all well and good so long as the Government had the wherewithal to keep meeting the payroll.

By the spring of 1917 this was no longer the case. Britain was pretty much bankrupt. The coffers were bare and nobody was interested in lending us any more money. All the credit cards were maxed out.

So the Generals were given the bad news. Six million shells for the third battle of Ypres? In your dreams lads.

No more overtime on the Solway.

Until a certain Mr Balfour came up with a cunning plan which was duly adopted.

He caught a boat across the Atlantic and sailed past the Statue of Liberty into New York harbour. He did the rounds of the big Jewish banks on Wall St and peddled what has to be one of the dirtiest deals in history.

His pitch was pretty straight forward.

If you guys lend us the cash we need to pay the lasses on the Solway to fill enough shells for the Third Battle of Ypres, we will promise to make Palestine a homeland for the Jewish people.

The dirty deal was duly shaken on.

And the shells were duly dropped on the German lines. They churned the ground into a sea of mud where over a million men perished in what became known as the battle of Paschendaele.

And the overtime on the Solway was paid in full.

And thirty years later the Palestinians were issued with an eviction notice.

You could say the rest is history.

So what to make of the statue?

I don't know really. The young women who worked the Devil's Porridge certainly played a big part in us eventually winning the most pointless war in mankind's dismal history.

I guess we should wonder how we would feel if the boot was on the other foot. I wonder what the Daily Mail would have had to say if the Germans had unveiled a similar statue somewhere in the Ruhr to celebrate the munitions workers who filled the bombs the Luffewaffe dropped on London in the Blitz?

Something tells me the Mail would have filled the front page with spitting outrage.

A heavy price was paid for all those millions of shells. By the poor sods they landed on and the poor sods who died in the sea of mud they created and by the people of Palestine who were driven from their land.

Is such epic misery worth celebrating with a statue?