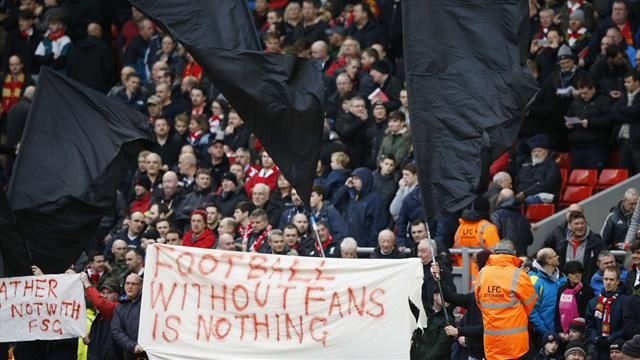 I wasn’t at the Liverpool Sunderland game on Saturday. Three of us share two season tickets and it was my two sons who went to the match. On the surface of things, the fixture was on the mundane side of inconsequential. We – Liverpool – are a pretty miserable outfit at the moment whilst Sunderland are a perennially miserable outfit. It was mid table against bottom of the table. It was a grey, grey day in February. It was nothing much.

The game wasn’t covered live on either TV or radio. Why would it be? Logically I should have felt little regret that I hadn’t drawn this particular match out of the hat. A five hour drive up and down a wet and windswept M6 on a dank day in February to watch such dismal fare was hardly the most appealing prospect. At least it shouldn’t have been.

But this wasn’t just any run of the mill clash between twenty two mainly foreign and universally over paid individuals. In fact, what went down on the field of play was a side show. The main event was to be found on the terraces among the supporters who are every now and then referred to as Liverpool’s 12th man.

Last week our American owners announced the prices for next season’s match tickets last week. This is a year when the club will receive a windfall of £50 million thanks to the insane TV deal which is about to kick in. Fair enough. Just a telephone number. Some context would be good. £50 million is half of the savings the Government is looking to make by the heaping misery and abject poverty on hundreds of thousands of citizens via their hated Bedroom Tax. As in serious, serious cash.

Liverpool’s annual turnover will jump up to about £350 million next year. Assuming we have a few cup games, the club will sell about one and a quarter million tickets. Basically thanks to the TV money the club could give every one of these tickets away completely free of charge and still be over £10 million better off. Wow. Let's get real here, not so many businesses are receiving this kind of windfall in these brutal economic times.

What an opportunity for our owners to choose to do the right thing. The terraced streets that wrap themselves around Anfield are some of the most deprived in Europe. Half of the houses have every door and window sealed off with tin sheeting. It is the kind of place where plywood just won’t do. Unemployment, gangs, drugs, foodbanks,. Anfield is a tough, tough place. Over recent years Liverpool the city has managed to drag itself out of the gutter Maggie Thatcher consigned it to all those years ago. But it is hardly rich. It is a city where the 0.1% of super rich citizens are either footballers or gangsters. Otherwise jobs are scarce and the pay is crap. Once upon a time not so so very long ago, the money collected by the Customs House on the docks represented over 60% of the income of the whole of Britain. Those were the days when slaves and sugar made Britain the richest country in the world. The plunder of Empire poured in through the Albert Dock whilst the products of the Industrial Revolution poured out in the opposite direction.

For well over a hundred years the docks provided tens of thousands of workers proper jobs which eventually were properly paid. But not for so very long. Once the workers finally achieved fair rates of pay and better working conditions their days were numbered. The 1% hate fair pay and decent conditions, be they in Liverpool or Detroit.

The 1980’s happened and the majestic buildings of Pier Head suddenly looked like some kind of a sick joke. Yosser Hughes became the face of a blighted city. I can do that. Giz a job.

In the tough industrial cities and towns of Britain, going the match on a Saturday afternoon had always been one of the few affordable pleasures available to those who grafted forty and fifty hours a week for not a lot. It seems almost quaint now.

A few months ago I gave evidence at the Hillsborough Enquiry. To jog my memory they dug out a letter I had written a few days after the disaster and gave me a copy. I had enclosed my match ticket which had never received the attentions of a turnstile operator. I looked at it and more than anything else it was the price that rattled my cage. Liverpool v Nottingham Forest. Hillsborough Stadium. Saturday 15th April 1989. Kick Off 3pm. Leppings Lane Terrace.

£5! For an FA Cup Semi Final. In 1989. What would an FA Cup semi final ticket cost now? Probably twenty times that. I did some research. To stand on the Kop for the match in 1989 cost £3. So how did that compare in real terms to today's obscene prices?. More research. There was no minimum wage back then, but the average draw for 40 hours of unskilled work was £8000 a year. So £4 an hour.

This got me to checking out other areas of 1989 life which were more affordable than they are today. In those days I was a minimum wager myself as we struggled to get an infant business into young adulthood. My £8000 salary made me eligible for a mortgage of £28,000. This was more than enough for me to buy a Lancaster two up and two down for £22,000 – the deposit was £1000. The repayments came in at £120 a month – 30 hours worth of minimum wage work. A 2016 version of me on minimum wage would qualify for a mortgage of £50,000. This would be no great use as according to Google my old gaff would now set me back £180,000 and require a deposit of north of £30,000.

Back in 89, an hour’s work would be enough for five pints in the pub, two cinema tickets and ten litres of fuel. Now an hour’s graft gets you a couple of pints, one cinema ticket and seven litres of fuel. These things are dearer than they were in 89, but nothing approaching the 900% real terms increase in the cost of watching football from the Kop.

No wonder life has become such a bleak grind for so many. A life of spending most of your money paying the rent and keeping the lights on. A life of going out once in a blue moon. A closed down life of work, endless TV and not a lot else.

We lost of course. She won. But for a while we gave her a run for her money. The Tory Government met the resistance of the city with the same kind of implacable fury the Waffen SS used to put down the Warsaw Uprising forty years earlier. OK. Not quite that! By the end of the 80's Liverpool seemed well on the way to becoming a British version of the kind of post industrial nightmare Detroit is now.

I guess the good folk of Detroit never had the same kind of instinctive unity that the Scouse nation has always been able to rely on. The city somehow managed to stay on its feet and against all sensible odds it has re-invented itself as one of Europe's most popular weekend destinations.

All of this meandering around my formative years brings me very belatedly to the point. On Saturday afternoon the Kop decided that taking it on the chin wasn't their preferred option. They announced to the world they were making the figure 77 iconic. As in the eye watering £77 ticket. A mass walkout was planned for the 77th minute. A die was cast and I suddenly wished I was making that rainy soaked drive down the M6. How bloody crazy is that? I wanted to go to the match to get the chance to walk out early. Whoever said that being a football supporter is any kind of sane pastime.

As the moment of truth drew nearer I was nervous as hell. For two days the chatter of the football world had been all about how many would vote with their feet. And lots of people were anxious. The general feeling was that if the Liverpool fans failed to step up to the plate, then the 'People's Game' was probably lost forever. For sixty five minutes the stadium was eerily quiet. Instead of the usual array of colour, the Kop waved giant black flags. Usually the Kop waits until the dying moments of the match to sing 'You'll Never Walk Alone'. Not this time. All of a sudden the noise levels shot up in the 75th minute as the scarves were raised high. Then Gerry Marsden's 60's anthem was replaced by a roar of anger.

And 15,000 Scousers got up from their seats and walked out. Thank Christ. So. Still some life in the old dog yet. How the owners must have hated it in their Boston ivory towers on the far side of the grey Atlantic. Goddamn sonofabitches! This isn't how this franchise is supposed to play out! Well guys.... tough. You had your Tea Party way back in 1773. Looks like it's time for us to have ours. And guess what, we don't like getting ripped off any more than you did. I think you are about to discover you have picked a troublesome enemy. Will we win? Who knows. It would be nice if people power could find a way to give the 1% a couple of black eyes and a cracked rib. Because this isn't just about football. It's about just about everything. It's about the bloody, sodding 1% ripping us off and then ripping us off some more.

As I write this, the news is so far so good. The walkout has generated a huge amount of press and I have yet to read a single word of support for the Bostonian price hike. In the eyes of the world, they are the bad guys. Well, Yippee Kay Yay. They are hiding of course. They always do. No doubt they are hoping like hell that if they keep their heads down it will all go away. I doubt it. We have the taste of blood on our lips. This one has the chance to run and run. Well bring it on. It's about time. Maybe we might even get to win this time. Just for once. They will clutch at the straw of the memory of Maggie and try to follow in her ferocious footsteps. Well, I'll paraphrase a quote from an American Vice Presidential Debate.

Anyway. It's time I come clean and own up to the fact that I have some skin in this game. A couple of years ago a released a short book called 'King Kenny's Revolution'. It tells the fictional tale of a fans revolt against a set of fictional American owners of Liverpool Football Club. In the wake of the events of the weekend, it seems the right and proper thing to do is to put it into the Amazon free section. So if you fancy a read, to can download yourself the book by clicking this link. Unlike watching the match it is entirely free at the point of use.

I hope you enjoy it. Please pass the link around. 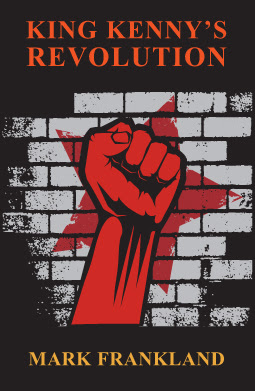